Krasl Art Center and the Coastline Children’s Film Festival (CCFF) combine forces for Flick-or-Treat! Films will be announced in September. 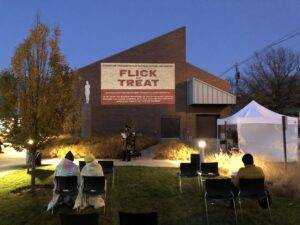 Head to KAC in St. Joseph on October 8 at 7:30 pm to decorate your own pumpkin to display at KAC and then enjoy projected silent films with a recorded piano accompaniment from Dr. Larry Shanker on KAC’s grounds. Pull up a blanket, enjoy popcorn, coffee or hot cocoa from Red Arrow Roasters, and experience classic films projected on Krasl Art Center’s building. A $2 suggested donation supports CCFF and KAC collaborations.

Flick-or-Treat 2021 was underwritten by the Virginia & Harvey Kimmel Family Foundation. This activity is supported by the Michigan Council for Arts and Cultural Affairs Minigrant Program administered by the Arts Council of Greater Kalamazoo. 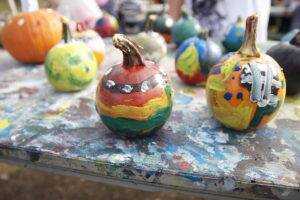 Be a part of the event and showcase YOUR carved or decorated pumpkin to a Community Pumpkin Walk on view all weekend. Simply attend KAC Family Day from 11 am – 5 pm, and see the display during the films.

The 80-minute lineup of films includes: 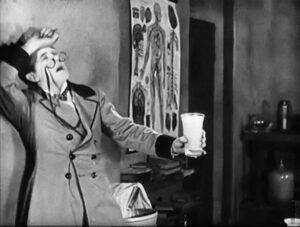 Even before he teamed up with Oliver Hardy, Stan Laurel’s solo films were often quite funny, especially  when he spoofed a famous film such as The Spoilers (the Laurel version is called The Soilers) or Blood and  Sand (which became the two-reel Mud and Sand). One of the funniest of these “travesties,” as they were  called in those days, was Dr. Pyckle and Mr. Pride, in which Stan lampoons Dr. Jekyll and Mr. Hyde. As the  kindly Dr. Pyckle, Laurel is experimenting to discover a drug that will separate the good from the bad in  man. When he finally has an elixir, he drinks it with trepidation. After a satirical sequence of comic  spasms, the horrific Mr. Pride reveals himself and proceeds to terrorize the town: he chases a little boy  down and steals his ice cream cone, he cheats at a game of marbles, and he explodes a paper bag behind  a little old lady, startling her. Worst of all, he tricks one of the town’s leading citizens into getting caught  in a Chinese finger trap! The whole town is up in arms at these evil acts but Pride manages to take the  antidote before they can catch up with him. He goes through yet another transformation before his  assistant (Julie Leonard) catches him. Devastated over what he has done, Dr. Pyckle decides to poison  himself, but instead of the fatal brew, he mistakenly drinks castor oil. 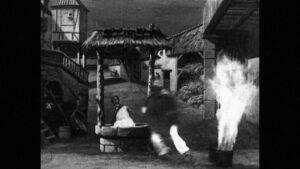 The film is a comic take on traditional fairy tales in which a well is often characterized not only as a  village’s central gathering place but also as a place for magical testing of characters’ goodness like The  Frog Prince. More specifically, the film plays with the traditional fairy tale concept of a magical woman,  disguised as a beggar at a well, testing the generosity of passersby and rewarding those who pass the  test. In Méliès’s version of the story, however, the human characters get no magical reward; rather, the  witch is sympathetic rather than wicked, and her farcical punishment of the greedy landowner is  designed to be read as fully justified. The Enchanted Well was made in 1903, just as Méliès was reaching  the high point of his career as a creator of fantasy films. Méliès himself appears in the film as the farmer  with the donkey. The film’s other special effects were created using stage machinery, pyrotechnics,  substitution splices, and photographic dissolves on a black background. Méliès also drew freely on the  gymnastic abilities of his actors, with much of the film enlivened by comedic acrobatics. 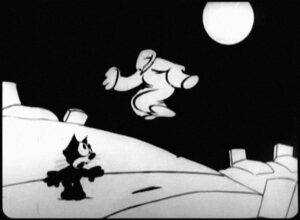 Inadvertently caught by nightfall, Felix rushes home only to find that the spirits of the night have  followed him there! Thankfully, any untoward cause for Felix’s nightmarish visions dissipates once he  sees that it’s all a mirage; and in the meantime, the Sullivan studio brilliantly captures the sort of panic  that paranoia brings. A scene of Felix’s long shadow, cast by a window in a dark hall, is an ingenious use  of background as cel overlay. The film’s opening scenes of Felix bumbling in the dark woods call to mind  the more comical Felix the Cat Switches Witches (1927); this time, however, Messmer manages to forgo  gags for a magnificent sense of uneasy dread. 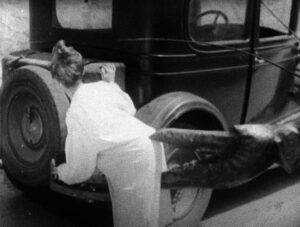 After a glutton (Billy Bletcher) indulges in a midnight snack of lobster and a pickle, his indigestion leads  to a surreal nightmare where he is chased by the crustacean itself! Billy Bletcher’s low, gruff voice is  synonymous with animated villains in the West Coast cartoons of the 1930s, most notably the Big Bad  Wolf in Disney’s Three Little Pigs (1933). The special effects in The Fresh Lobster are ingenious—an actor  in a lobster costume is seen in tight shots during the chase, but the film also uses live-action/animation  with painted eels over photographed stills, similar to Out of the Inkwell. As ingenious as The Fresh Lobster’s  use of multiple special effects is, there is an alluring mystique in the film’s origins. 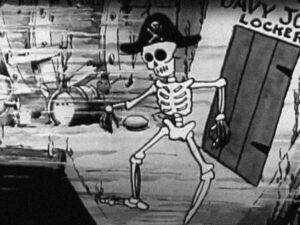 A plane flight for Waffles the Cat and Don Dog ends up underwater, where fish and walruses engage in  a frightful frolic. The Haunted Ship is one of the very best Van Beuren cartoons of the John Foster era made in the thick of the 1930 season, when the studio was first grasping how to make engaging musical  cartoons. Gene Rodemich, who began scoring for Van Beuren’s cartoons beginning with Good Old School  Days (1930), contributes an outstanding accordion-heavy score that beautifully suits the cartoon’s frantic  energy. There is an incredible variety of eccentric, spirited animation on display here, created by artists  of varying ages and skill levels-from the seasoned Vet Anderson (several shots of fish swimming toward  camera and dancing) to a very young Jim Tyer, whose scenes include the first shot of Don forcing a  wildly jittery Waffles to play a shipboard piano. The film’s de facto director, Mannie Davis, contributes  most shots of the turtles singing. 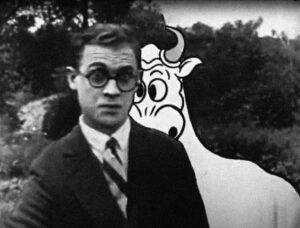 Avant-garde artist Walter Lantz peacefully “paints” outdoors, but creepy chaos ensues when Dinky and  Weakheart lure him into a haunted barn. A budding teenage animator in the late 1910s, Walter Lantz  made his mark and established stardom in the animation world with his efforts at the Bray Studios. After  being brought in to work on a revival of Bray’s Col. Heeza Liar series in 1922, Lantz’s directorial debut  came with the creation of his own characters for a recurring series: Dinky Doodle and Weakheart the  dog. Lantz himself shared the screen with his cartoon creations, leading to results both clever and  memorable-if not unlike aspects of Max Fleischer and Out of the Inkwell. 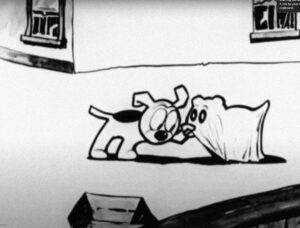 When ”Uncle Max” subjects Ko-Ko and Fitz to the terrors of a haunted house, havoc ensues and Max  has a big laugh at the end. Throughout the medium’s history, few artists have tapped the potential of  animated acting—the idea that drawings could and should take on not just a life, but a soul of their own.  While Max and Dave Fleischer deserve all of the credit in the world for conceiving the Clown, an  animated actor that regularly had legitimate beefs and confrontations with his flesh-and-blood creators,  the acting in the earliest Out of the Inkwell films is carried by the limited rotoscope technique alone.  When Dick Huemer, the Fleischers’ greatest animator in the silent era, began his work on the series,  the improvement in the films’ appeal, animation, and acting was stratospheric. It allowed the films to  expand on animation’s vocabulary. In this film take note of the acting “business ” that had not been  prevalent in the earlier films but was now commonplace. Ko-Ko tries to get Fitz to enter the haunted  house to retrieve his hat; naturally, Fitz refuses. Ko-Ko promises him a bone as a reward, but no deal.  Ah, but how about two bones? Fitz agrees, but he’s still not quite over his fear. He returns to Ko-Ko for  reassurance that the deal is really still for two bones! loaded with the trademark Fleischer spookiness  and imagination, it was this kind of humanity-showing that these characters were capable of real  cowardice and greed—that Ko-Ko ‘s contemporaries lacked, and that ensured Ko-Ko still stands the  test of time a near-century later. 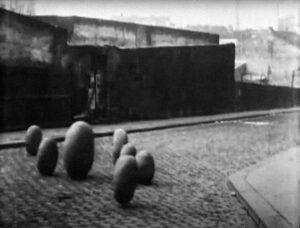 When two Parisian thieves upset a cart of pumpkins, they inadvertently start a mad dash to stop the  gourds as they wreak havoc on the city. Based on a scenario by Louis Fenillade known for the 1913  Fant6mas serial, The Pumpkin Race shows an unusually strong use of camera tricks by director Romeo Bosetti. Working on the model previously set by Fenillade and seminal female director Alice Guy Blache in Course a la saucisse (“Race for the Sausage,” 1907), Bossetti, possibly assisted by Fenillade,  builds on the usual frame of the Gaumont studio chase films by giving the object of the chase a mind of  its own. Pumpkins climb over rails and through a dining room with the assistance of strings (one of  which seemingly breaks, as the last pumpkin is carried partway by an actor); pumpkins climb stairs and  jump into windows via reverse photography. Filmed on a mixture of sets and actual city streets,  Bossetti’s film deploys surprisingly effective animation, imbuing the gourds with a mischievous character  all their own. 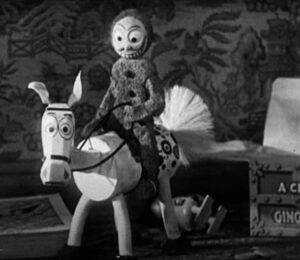 Snap the Ginger Bread Man’s ordinary day is upended when a witch’s cat coerces him into an oven… but  Snap’s goose isn’t permanently cooked. This fun stop motion curio was one of a series of shorts  produced by Kinex Films, a small studio in Hollywood. They were originally created exclusively for the  16mm home movie rental market and were made available at camera stores. It is likely that this  particular short was animated by John Burton, with Frank Webb designing the sets. The Kinex Studios was a small outfit, but it nevertheless pioneered many important techniques in stop motion, including  the uses of moving backgrounds and replacement faces to create animation. Because they were not  released theatrically and were never broadcast on television, these films have languished in obscurity for  decades. Today they’re known only to animation historians. 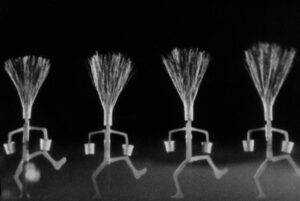 A rarity and made a decade before Fantasia. This one has it all. The wizard’s apprentice tries his hand at  the black magic while the wizard is away. He animates a broom to fetch water, which becomes an army  of brooms that floods the room. The wizard returns and puts everything back to normal.