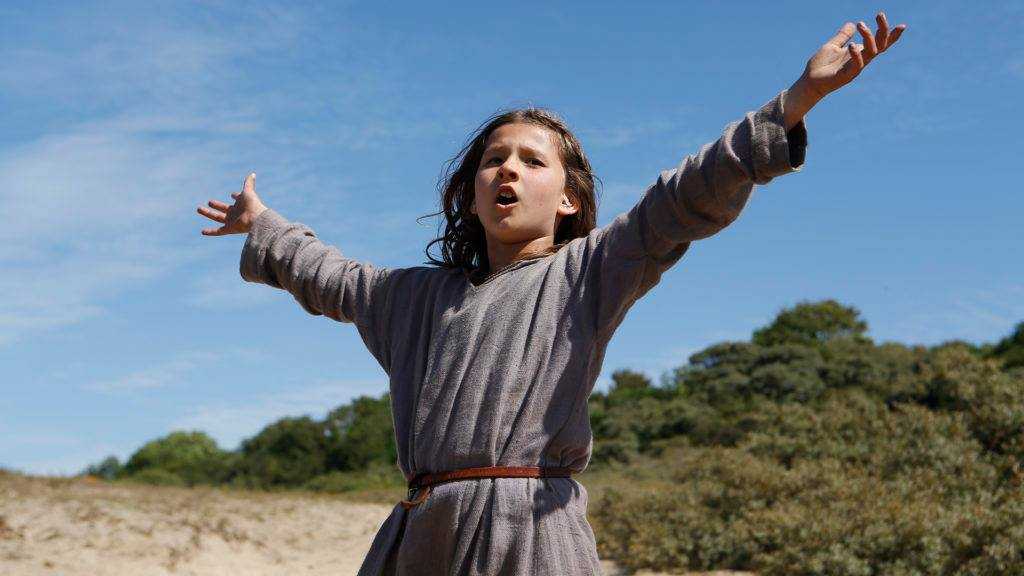 JEANNETTE, the Childhood of Joan of Arc
Directed by Bruno Dumont, France, Live Action 2017
105 min, in French with English subtitles, Ages 12 and up
Free/$1 suggested donation

French master Bruno Dumont (Hadewijch) recreates the adolescence of the Maid of Orleans as a radical, electro-metal musical. The battles, trial, and martyrdom of Joan of Arc have been chronicled by such cinema masters as Cecil B. DeMille, Carl Theodor Dreyer, Robert Bresson, Otto Preminger, and Jacques Rivette — but seldom has the crucial period of Joan’s preadolescent formation been depicted on screen. With his tenth feature, Bruno Dumont radically delves into Joan’s childhood with a category-defying period-cum-techno-head-banging musical, derived from two works by French writer Charles Péguy. Set in 1425 France, with the Hundred Years’ War raging off-screen, the film begins with eight-year-old Jeannette tending fluffy sheep in the village of Domrémy. She confides her mystical calling to her friend Hauviette, and although dissuaded by Madame Gervaise (hilariously embodied by a pair of identical twin nuns), Jeannette is ultimately buoyed by her faith and sets out to fulfill her destiny.

Exquisitely shot in a palette of royal blues, heather greens, and sand by Guillaume Deffontaines, Jeannette oozes elemental beauty. Dumont casts non-actors in the leading roles and makes use of live sync sound for the sung, a cappella dialogue, creating an intoxicating combination of naturalism, amateurism, and anarchic artifice that is bolstered by an electro-metal score from French multi-instrumentalist Igorrr and a majorettes-meets–mosh pit choreography with hair-wagging paroxysms. Heady, strange, genuinely funny, and completely out of time, Jeannette is one heck of contribution to the canon of “Joan films” and further proof of Dumont’s astonishing versatility and uncompromising vision.

From The New York TImes—the characters don’t only sing, they dance, and in astonishing ways. Ms. Prudhomme twirls, cartwheels, stomps and headbangs, as does Jeanne Voisin later on as the teenage Jeanne, who’s dropped the “ette” from her name. It’s a bit funny, but it’s also more than that. Between the music and the dance, the temptation is to conclude that Mr. Dumont is trying to “modernize” Joan’s story, as she becomes determined to follow her visions and create an army to save France. Given that the very act of filming is a modernizing factor, that’s true in a sense. But his artistic aim is, I think, the inverse of that. “Jeannette” throws the modern back at the medieval, making no distinction between religious ecstasy and that experienced in certain contemporary contexts of music and ritual. It’s a provocative proposition that yields a film of genuine spiritual dimension

The Krasl Art Center is thrilled to be a venue for the 2019 Coastline Children’s Film Festival!  Join us for screenings throughout this two week festival, including the premiere screenings and the grand finale with live music by Dr. Larry Schanker!  Donations are appreciated. See www.coastlinechildrensfilmfestival.com for film descriptions, age recommendations and the full schedule.

*All titles are subject to change.